What is Britain eating? The ultra-processed truth about 10 of our bestselling foods

From Cherry Bakewells to Fray Bentos pies, do we really understand the cocktail of ingredients in our favourite brands? Nutritionists assess them – and just what they might mean for our health.

Web URL: Read the story on The Guardian website here

The evidence that excessive consumption of 'ultra-processed' foods (products of a highly-industrialised global food system) is driving the current global epidemic of diet-related disease has become undeniable.

And that epidemic includes mental as well as physical health disorders, as the same 'junk-food' diets that are contributing to obesity and diabetes, allergies and immune disorders and heart disease are also very bad news when it comes to healthy brain development and functioning.

For more information on the underlying research linking highly processed foods with ill-health, see this recent detailed, open-access report from the International Panel of Experts on Sustainable Food Systems shows how industrial food and farming systems are “making people sick” and fuelling the obesity crisis.


See also the following research papers, explaining the need for proper classification of 'ultra-processed foods', and showing how their consumption relates to malnutrition and chronic ill-health in both developed and developing countries.

As the saying goes: if your granny wouldn’t have recognised what’s in it, it’s probably not real food. Yet half the food we take home is made in factories from a list of ingredients and additives as long as your arm, most of which never found a place in any grandparents’ kitchen cupboard – and wouldn’t in yours or mine today.

We are a nation of ultra-processed-food eaters. Our lives have become too fast-paced to cook from scratch and our tastebuds now crave the sweet and salty flavours that ultra-processed foods deliver. Our bread is fluffy and sticks to the teeth like candyfloss. Our yoghurts are super-sweet and creamy. We have ready meals that are shelf-stable (long life without refrigeration), which we can prise open, heat, eat and go.

Nutritionists are alarmed. The ultra-processed foods we tend to eat now are calorie-dense and a major contribution to obesity. They have also been stripped of bioactive compounds such as phytoestrogens and fibre, which we know are good for us. All we get is calories (and occasionally added vitamins). And although individually they are all approved for safety, we have no idea what effect the cocktail of additives might have on us in the long term.

The nutritionist Dr Courtney Scott from the Food Founation says it costs less to fill up hungry kids on ultra-processed foods than fresh. “For £1 worth of spinach, say, you can get 60 calories. For £1 worth of apples you get 307 calories. For £1 of turkey dinosaurs, you’re getting 730 calories. It is not surprising that the foods that are palatable – they are full of salt and sugar and fat – and that are calorie-rich for a low price are the ones that we’re consuming the most of,” she says.

A group of international scientists has produced what they call the Nova definition of four classes of food, from fruit and vegetables in their natural state to ultra-processed, which are, they say, “industrial formulations typically with five or more and usually many ingredients”. These include “substances not commonly used in culinary preparations”, and contain additives “whose purpose is to imitate sensory qualities” of natural foods such as fruit. They are, says Prof Carlos Monteiro from the University of São Paulo in Brazil, “intrinsically unhealthy”.

“Maybe many of these preservatives are innocuous but even if only 10% or even 1% of them are harmful, people are unnecessarily exposed to harm,” he says. And they are re-educating our taste preferences. “The hyper-palatability tends to make people eat more than they need and make people used to accentuated flavours they will not find in most real foods.”

His collaborator Prof Jean-Claude Moubarac, from the department of nutrition at the University of Montreal, Canada, goes further. These foods cause social and cultural damage, he says. “They promote overconsumption and a relationship to food that is characterised by compulsion, stress and anxiety.”

We looked at what is actually in 10 of Britain’s favourites, choosing a top seller from 10 categories of packaged foods tracked by Euromonitor International. What is the country eating? 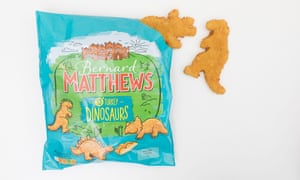 “Something that has only 46% turkey is going to be full of a lot of other stuff,” says Scott; we should therefore be wary of this, nutritionally, if we’re looking for a healthy source of protein.

In spite of the breadcrumbs, there’s not much fibre – 0.7g per 100g once cooked. The company’s website promotes its dinosaurs as “Jurassic fun for kids” with “no artificial colours, flavours or preservatives”, but, says Scott, “I don’t know anyone who would have paprika extract in their home kitchen.” Paprika extract is a highly concentrated oil-soluble extract from capsicum pods. Nor would they have milk protein, which is extracted in a factory, or skimmed milk powder. The dinosaurs also contain two forms of salt – sodium chloride and potassium chloride, making up 16% of a child’s daily allowance in 100g (just over two dinosaurs).

Bernard Matthews did not respond to requests for comment. 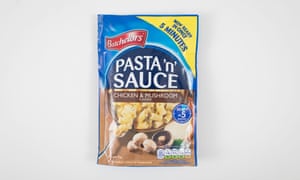 Premier Foods, which makes Batchelors and also Mr Kipling cakes, says: “Processing plays a very important role in food safety and preservation. We recognise the importance of healthy lifestyles and balanced choices, and continually work on developing increasingly healthy and convenient options for consumers, as well as having an increased focus on positive nutrients such as fibre and protein.”

Drying foods was one of the oldest preservation methods, they say. “Batchelors Pasta ’n’ Sauce is low in fat, has no added MSG and no artificial colours or preservatives.” 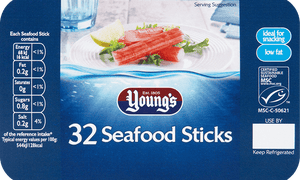 A gold star for anyone who knows how surimi is made. It does contain Alaska pollock – but not whole slices or chunks of fish, just the protein; it is fish that has been mechanically beaten and pulverised to a paste. As it is tasteless and shapeless, sugar is added, followed by a host of additives – two forms of starch and some shellfish bits and flavour enhancers – so it can be formed into a solid, fishy-tasting stick.

Young’s said it would not be able to comment. 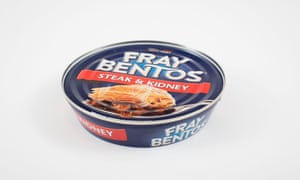 This is one of the bestsellers in Euromonitor’s shelf-stable category. Water is the first item on the ingredients list, followed by the puff pastry. The meat is only a fifth of this tinned pie. “The thing that struck me about this product was the amount of processed ingredients that you wouldn’t find at home – emulsifiers, stabilisers, malt barley extract. It’s a pie but it also has sugar in it,” says Scott. One pie is supposed to be for two people, but “I don’t know who eats half a pie.” A whole one would deliver 60% of the daily salt intake and nearly 20% of fat.

There is no veg. “Fresh foods rich in bioactive compounds (flavonoids, for instance), including onions, garlic and other foods used in freshly prepared dishes are absent from these products,” says Monteiro. “Being ready-to-eat products, it is unlikely they will be consumed with fresh foods that usually need preparation. On the contrary, one ultra-processed food tends to be consumed with other ultra-processed foods.”

Xanthan gum is not from an exotic tree. It is fermented sugar. The name comes from the type of bacteria used. It is a stabiliser to bind together ingredients such as fat and water that would otherwise repel each other.

Fray Bentos did not respond to requests for comment. 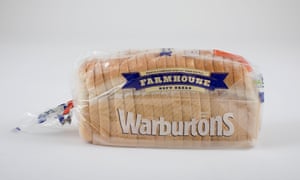 “As far as we’re concerned, the industrial loaf with all its additives isn’t actually bread,” says Chris Young of the Real Bread Campaign. It is calling for an Honest Crust Act to legally define “sourdough”, “artisan”, “wholegrain” and “craft”, as well as “fresh” and “freshly baked”, and to make manufacturers list all their ingredients – some are left out on the basis that they are just part of the processing.

The launch of the Chorleywood Process in 1961 changed the UK’s bread drastically. This was the discovery of how to go from a pile of flour to sliced, plastic-wrapped bread in three to four hours, using lower-protein wheat, vitamin C, fat, yeast and high-speed mixers. Bread gained additives, “relaxants to overcome the stress of the machine and then tighteners again”, Young says. “It was a milestone – or tombstone – in the history of bread.”

A Warburtons spokesperson says bread is one of the UK’s main sources of dietary fibre. “It is misleading to consider mass-produced bread an ‘ultra-processed food’. We bake it fresh, every day, using the same methods you would at home. However, in order to meet demand and ensure that we are able to produce affordable products for our consumers, we do this on a much larger scale.” 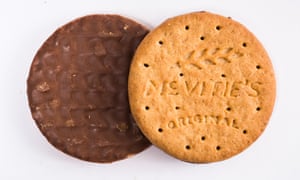 There is lots of sugar in this, predictably – and not just sugar (twice) but glucose-fructose syrup. Dried skimmed milk will also be sweet. The digestives also contain palm oil, much used in ultra-processed foods. “Health-wise, palm oil is not fantastic because it is a highly saturated fat. It is being used instead of trans fats, which used to be commonly found in this type of product,” says Scott. “From a nutritional perspective, we’ve swapped one particularly unhealthy fat for one that isn’t particularly good for you either.” There are also concerns about the environmental impact of farming and harvesting palm oil.

McVitie’s says it provides transparent information so people can make healthy snacking choices. “Biscuits are simply baked by combining a few ingredients. They are a source of fibre and adhere to strict nutrition guardrails,” it says. 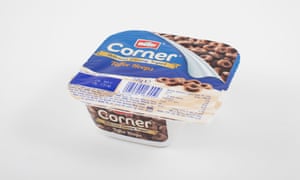 Site by Redstone Websites. Easy to Use Web Content Management. 2022 © All Rights Reserved.